Forty-six years ago today the Highgate Vampire case was taken into the public domain for the first time in the form of a front-page news feature article headlined "Does A Wampyr Walk In Highgate?" There was no mention of David Farrant in the article which focussed on the findings of the President of both the British Occult Society and the then fledgling Vampire Research Society. Many have since attempted to jump on the publicity-bandwagon that ensued, but none perhaps have been so desperate and compulsive as Anthony Hogg and his collaborators Trystan Lewis Swale and Erin Chapman who are currently trying to track down two females who have hithertofore enjoyed a very private existence.

A response from the author of The Highgate Vampire, Seán Manchester:

"Hogg, Swale and Chapman make clear their intention to pursue two women who I happen to know will resist any attempt to have their privacy compromised after all these years, but the trolling trio show no interest whatsoever in finding eye-witnesses identified with names and addresses in the Hampstead & Highgate Express in the early months of 1970. These eye-witnesses only differ from Elizabeth (I do not include Jacqueline because she is not 'Lusia' as falsely alleged by the stalkers) in one regard. None of them have any connection to me. Had they a connection to me they would doubtless be pursued to the ends of the earth by these obsessive non-entities out to grab their undeserved fifteen minutes of fame at the expense of innocent women and, of course, on the coat-tails of my book The Highgate Vampire and myself. What they are doing is morally unacceptable, and should not be encouraged or helped in any shape or form." - Seán Manchester (27 February 2016)

Kenneth Frewin, R Docherty, Julian McKennar, Audrey Connely and Nava Arieli (aka Nava Grunberg) were all identified as first-hand eyewitnesses in the Hampstead & Highgate Express, February — March 1970. Trystan Lewis Swale, Anthony Hogg and Erin Chapman are content to ruthlessly pursue Elizabeth Wojdyla while ignoring the other self-proclaimed eye-witnesses. Elizabeth Wojdyla was not identified by name in 1970, albeit she was referred to anonymously on television programmes that year. Mary Farrant and Colette Sully, although sympathetic to David Farrant at the time, might bring fresh evidence and certainly an unheard perspective. Females much less sympathetic to Farrant who were also identified by name in newspapers and magazines, eg Victoria Jervis, Nancy O'Hoski and many others, might equally shed new light on the goings-on in the 1970s. They have unique and privileged information. But you will find neither Hogg nor Swale nor Chapman showing the slightest interest in these females because they have no association with Seán Manchester. 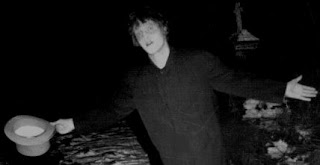 As David Farrant, now turned seventy, falls further into an undead slumber, Anthony Hogg, Trystan Lewis Swale and Erin Chapman have become his replacement, using pernicious propaganda originating with Farrant to pursue an identical vendetta against the exorcist Seán Manchester. They are this generation's clones of a clown who nobody took seriously back in the 1970s. Swale, who regards Satanists as being mostly atheists and is one himself, declared on his site yesterday that Seán Manchester "doesn't know much about Satanism." The implication is that these clones do and their undisguised empathy with the dark side provides common ground with the source of all the malice.

Further reading on this topic:

Seán Manchester's final comment in 2013 on the Highgate Vampire case:

"It was necessary to tell the full story, even though this was not an easy decision, due to the overwhelming public interest in the case﻿, but I really now feel the subject has been exhausted and all there is to say about it has been said. It has also exhausted me after decades of television and radio interviews, film documentaries and related projects concentrating on this one topic. There will always be people seeking to cash in and exploit my work for their own ends. Many, of course, will be too young to remember the happenings at Highgate. That notwithstanding, my book The Highgate Vampire is optioned for cinematic treatment, but that is not something I wish to elaborate upon here.

"I am willing to quietly and privately set the record straight where need be, but I gave my final interview about this case to the broadcast media some years ago and have no intention of returning to the topic despite persistent requests from television and radio programmes for me to do so almost every week. I still make contributions on unrelated matters, but this subject of intense public fascination — in some cases obsession — concerning events at Highgate Cemetery more than forty-four years ago is not something I have an appetite to return to any longer. Having said that, my memoir in its unexpurgated form obviously mentions the case in a proper and fitting context to my life. However, I have no plans to have my memoir published — now or ever.

"Unimaginable horrors were experienced by folk at the time of the contagion and these I feel are best not evoked. They should be left undisturbed. The reality that I and others, most now sadly deceased, experienced all those many years ago no longer exists, and next to the hunger to experience the supernatural, albeit in this case at its most maleficent and deadly, there is perhaps no stronger hunger than to forget.

"Should an individual have a particular query about those mysterious happenings, I will give that person an answer (but not an interview); otherwise I have too much in the present with which to be concerned without reliving nightmares from the past."